Severely ill patients and those with rare debilitating conditions could be given new medicines years before they are licensed, under new regulations.

The Early Access to Medicines scheme would enable a small number of promising medicines to be fast-tracked.

The idea is to help patients in England with severe illnesses who have no other treatment options.

The Medicines and Healthcare Products Regulatory Agency (MHRA) will oversee the scheme, being launched in April.

Health Secretary Jeremy Hunt said: "What patients want is sometimes to try medicines that may not be clinically proven to be effective but are clinically safe.

"We are streamlining the process so these medicines can be used much earlier - particularly if they have early promise - and that is something which will bring hope to a lot of patients." 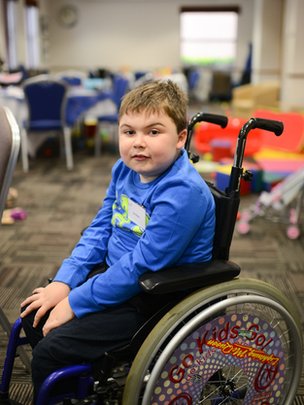 One patient who could potentially benefit is Liam Triggs, aged nine, from Liverpool, who has Duchenne muscular dystrophy.

The muscle-wasting condition is progressive and Liam's condition will continue to deteriorate unless an effective treatment is found. There are several potential medicines in late-stage clinical trials

Liam's mother, Joanne Ashton, said: "We are very hopeful that there might be an opportunity for him to take part in clinical trials

"This step forward has given us the hope we so desperately need. I would not put my son's life in danger, but we will do anything we can to help him."

But that can typically take a decade of patient trials and assessments before a licence is granted.

For unlicensed drugs to be used under the early access scheme, sufficient data from several years of clinical trials

would be needed to show that it looks like a promising and innovative treatment.

The MHRA will also carry out an assessment of the benefits and risks, which will be available for doctors

The MHRA said seriously ill patients - with conditions like cancer or muscular dystrophy - might be allowed access to a drug before it is licensed, and outside a clinical trial, where it could be shown there were no other treatment options.

The MHRA has estimated that one or two medicines a year might qualify under the scheme, although some in the pharmaceutical industry think it could be higher.

Harpal Kumar, chief executive of Cancer Research UK, said: "Time is of the essence for many cancer patients, particularly those with more advanced disease.

"It can mean the difference between life and death. Therefore this scheme, which has at its heart the potential to bring promising new medicines to patients faster, is to be warmly welcomed."

Department of Health officials said the scheme would benefit pharmaceutical companies by enabling them to gain experience of their medicines being used in the NHS.

How the scheme will work

When the MHRA has enough data to reach an opinion that a new drug works and is sufficiently safe, it can issue a promising innovative medicines (PIM) designation.

are still continuing or while drugs are waiting for authorisation.

Before it could be prescribed there would need to be a scientific opinion from the MHRA describing the risks and benefits of the medicine, which would enable doctors and patients to make an informed decision about whether to use the drug.

This might enable companies to attract investment and help ensure new drugs are tested in the UK.

Steve Bates, of the BioIndustry Association, said the move showed that the UK was committed to an "all-hands-on-deck approach" to speedily progress promising innovative therapies to patients.

But there was concern from industry that the scheme is currently unfunded by government, so companies will not be reimbursed for the cost of unlicensed drugs.

Mr Bates said: "Without centrally funded reimbursement, the scheme runs the risk of being underutilised."