My father was recently diagnosed with Ataxia 6. Would love to touch base with others with this specific type of Ataxia.

Sca6 diagnoised here at age 63, I am now 68 and my sister, which also has this, is 83. Everyone is affected differently even sisters!

Hiya! I have SCAR6 took me years but got diagnosed 3 years ago. I have no slurred speech, my visual disturbance, legs and balance affect me the most :-)

Hi. I also have SCA 6. I was diagnosed earlier this year, but onset was several years ago. My sister, 77, also has it, and my mother too. I also have dystonia.

Include me in the sca6 group. I was diagnosed about 2 years ago. I’ll be 60 next month. Nystagmus and ataxia are my main complains, but not that bad yet. Exercise helps with the body and mind…

I have sca 6 diagnosed 14 years ago, like my mother & her father. I am 68, everybody is different.

I have SCA6 and I am 46 years old, my 14 year old daughter has it as well as my dad and he is 70 years old. He is more severe than I am though. his three cousins also have it. We are all affected differently though as our repeats are all different.

Wow, that's young for your daughter, Amanda! What symptoms does she have?

I have SCA6 and I am 46 years old, my 14 year old daughter has it as well as my dad and he is 70 years old. He is more severe than I am though. his three cousins also have it. We are all affected differently though as our repeats are all different.

I and a brother and sister have SCA6. We are all in our 70’s and are in the U.S. What is your location? Our balance is the greatest problem. Our dad had it we are sure but he was not tested. He died at age 84 of colon cancer in1996.
Floyd Tannahill.

I would like to known how many of you that have SCA6 are in the USA and even what state ? I am in Kansas. has anyone found a doctor that really knows much about SCA6?

Hi, I have SCA6 and am 49, diagnosed 2 years ago symptomatic 2 years previously. Never heard of it before but my mum has it but her G.P said she had Vertigo and wouldn’t listen even when I was diagnosed. Can’t say I’m a fan, I hate Ataxia and everything that goes with it but we just have to get on with it. My balance and walking are rubbish, tinnitus, hypnoclonic spasms, odd random jerking, tremors, occasional slurred speech, chronic pain in my legs, bladder problems, sexual dysfunction and a Partridge in a Pear Tree. However it varies daily especially if I’m tired. Still just managing to work 4 days a week, I don’t drive as I’m frightened I’ll have a spasm and crash. I waited months for a specialist appointment that lasted 20 minutes only to be told sorry, no cure no treatment, other symptoms are not caused by Ataxia, yeah right, and then he discharged me. We’re basically on our own apart from the wonderful people on here. They are our support and our treatment as we share a mutual respect for each other and you can’t put a price on that xxx

I have SCA6 am 73l live in Kansas City area where do you live or were does he live,how old is he? I would like to here from you.

Hello, All. Thanks for having this SCA6 group. Mine came from my mother and we have the same degree (21), although she died shortly after we learned I had inherited the gene. She was 93 and a genealogist, so she was tested early as part of the Genome Project. At that time there were enough cousins to make a good comparison, but I only know one or two now. Our family line brings the SCA6 down from the Earle to the Knox to the Day lines, who were settlers of Loraine County, OH. As a child, my mother moved to Florida and that's where I live now as well.

While I am well acquainted with the physical affects, what is particularly troublesome for me now are the cognitive and psychological challenges that I didn't anticipate since we had not idea then that these were part of the disease. Just assumed my mother wasn't very nice. Now, I wish I could let her know why she felt so confused about some things that she was sure she was right about.

Oh, I'm 62, same age when my mother knew she had onset of symptoms.

I also have SCA6 inherited from my mother!

she was 60 when she died, I am 69. She got it crom her dad, he was about 50when he died ( us kids thought he was a very old man) He & my mother were always lovely people. 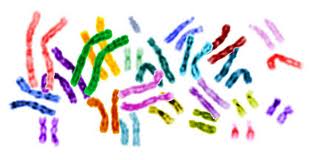 Mother's Day started me thinking about how this began (to my knowledge). I have Spinocerebellar Ataxia, Type 6 (SCA-6). There are many types that vary in onset, cognitive involvement, and other things that are of no interest to most people. I now know that I got the autosomal dominant gene from my mother, who unwittingly passed it along to me. Looking back, I recognize the ataxic signs began in her mid 60's--the gait, the speech, etc. After my initial diagnosis in 1997, I was angry with her for doing this to me (I didn't care that she never knew). "Come on, Ada." I thought I had just inherited her boobs, skinny legs, and smart mouth.

But she wasn't much of an information-seeker, and consequently, didn't realize she had Ataxia. Ada just thought... (actually, I have no idea what she thought). Although she and I were close, Mom went to great lengths to deny her Ataxia. She knew something was wrong, but backed away from putting clues together. Her family decided that her behavior was because she had never taken care of her health, drank too much, watched too much TV, stayed on her chaise lounge 24-7, and wanted to be catered to. My usually "snappy" mother took all of our judgements in silence. That should have tipped me off to a problem right there. As her only child, one of my saddest thoughts is that she was alone in this. Mom's self image was just too important to her and that trumped everything else. She said nothing, we said nothing. Ada died of pancreatic cancer before she progressed neurologically (she would have considered that the good news).

Children are a recurring theme and a big issue in Ataxia circles, since descendants have a 50–50 chance of carrying the gene. I think Mom became symptomatic in her 60s, me in my late 40s. The other shoe dropped when our daughter, Heidi, became symptomatic with her second pregnancy in her early 30s. Earlier onset with each generation is officially called anticipation. Our son, at 39, is asymptomatic. Our children and their spouses had their own families after my diagnosis, knowing the risk. My biological children, in-law children, and four grandchildren are supportive, aware that I may represent what they have to face in some way. Granted, I'm not the grandmother I want to be, but I can still hold the grandchildren on my lap, play on the floor, read books (sort of), give rides on Skeeter, my trike, the grocery cart, etc. 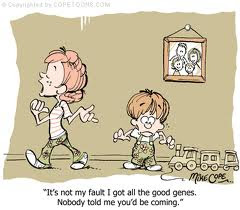 It's not rational to feel guilty (besides that, guilt is my least favorite emotion), but our children are so bright and beautiful, that I wanted anything that came from me to be perfect. It didn't happen that way. We all pass on characteristics to future generations through our genes. But, most of the time, it's blue eyes, a certain body type, or a predisposition for heart disease, etc. This felt more like a life sentence from a lottery.

So, do you test descendants for a disorder that has no cure, no treatment, and a 50% occurrence rate? The short answer is probably not, unless you want the information for planning or you just want to know. Most genetic researchers advise against testing asymptomatic children. First of all, minors are too young to give informed consent. Secondly, genetic testing is extremely expensive (a full genetic panel could exceed $5000.00) and is rarely covered by insurance in the U.S. Most importantly, children are better served by being encouraged to follow their physical interests and live their lives. If the Ataxia should manifest at some point, and they seek out information (family, physicians, support groups, websites), they'll figure out the particulars on their own.

The lesson: Nothing to be gained by anticipation (pardon the pun).