Pregnancy as the magical cure? BBC

Check this out. Admittedly neither I , nor you, have MS but I am told it is close to CA. Also re eggs, there are donations. Curious if anyone has heard of this? Asked my neurologist but so far no response. N 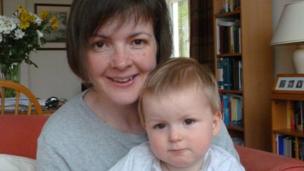 Elizabeth Quigley's symptoms eased when she was pregnant with Matthew

It seems almost too good to be true.

Pain disappears, mobility returns and distressing symptoms disappear. No drugs, no medication and no painful injections.

For some women, the suffering of seemingly incurable conditions such as arthritis and multiple sclerosis just seems to disappear.

And what is this miracle "cure"?

I know this happens, because it happened to me.

I was diagnosed with MS in 2000. Before I became pregnant with Matthew in 2010, my walking was becoming more difficult. I used a stick for balance at the very least.

I was not able to write or use the keyboard very well. But then, during pregnancy, lots of those things changed.

It became easier to walk. I could write legibly again and type on a keyboard. The tremor on my hands almost disappeared.

I also seemed to get stronger, carrying things was easier and, incredibly, I could even lift my baby son for about the first nine months, something I thought would be impossible.

I knew this might happen, but I didn't know why. And I didn't know it happened across a wide range of medical conditions until I began working on a BBC Radio Scotland investigation.

I've been trying to find out just what it is about pregnancy that causes all these symptoms to disappear and whether this quirk of nature could really be turned into the reality of a treatment.

During pregnancy oestrogen and progesterone levels rise to support the growing baby and to prevent a women's body from rejecting it. More than one hundred "autoimmune" diseases.

• Autoimmune diseases occur when the immune system wrongly attacks some of its own cells.

• Doctors say women suffering with at least one autoimmune disease, Lupus, can see their symptoms deteriorate in pregnancy.

The hormones suppress the immune system and also produce natural steroids to help support the baby.

It is not known exactly which of these factors is responsible for the dramatic improvement in the mothers' symptoms.

However for many women, after the birth, their symptoms deteriorate rapidly, which often causes an episode of deterioration known as a "relapse" in women with MS.

Two clinical trials - in France and the US - are looking at whether mothers given oestrogen or progesterone in the months immediately after childbirth can avoid these relapses.

The society asked 973 women their experiences of disability with MS and whether they had been pregnant.

They looked at how long it took the women to reach a recognised "milestone" of MS - of walking with a stick - and found that those who had been pregnant at least twice were less likely to have reached this milestone.

However, the medical experts co-ordinating the study pointed out that it was difficult to tell whether the women felt better in the first place, and so became pregnant more than once, or whether the pregnancies themselves had this effect.

The lifting of symptoms definitely does not happen to all women with these health conditions who become pregnant but it does happen to some.

Unfortunately the downside of this temporary relief is that the health condition does return - and can often return with a vengeance.

This strange quirk of nature seems to me to be a fruitful area for more investigation.

BBC Radio Scotland Investigates The Miracle of Pregnancy? will be broadcast on Sunday May 27, at 16:30.

We have known for some time on our forums that a good many conditions go into remission during pregnancy. Leave it to the media to call it a "magic cure," which is quite an overstatement. Long-term hormonal use might well cause problems worse than ataxia. There are probably more worthy avenues to pursue. Did you see Sharon's recent post about sinumet?

Yes I did. Still, this pregnancy thing blew my mind. My dr. will probably nix it. My husband thinks its nuts and our kids might kill us. If it was a sure thing... thanks for your sage advice. N

We have known for some time on our forums that a good many conditions go into remission during pregnancy. Leave it to the media to call it a "magic cure," which is quite an overstatement. Long-term hormonal use might well cause problems worse than ataxia. There are probably more worthy avenues to pursue. Did you see Sharon's recent post about sinumet?