NEW HAVEN, Conn., May 23, 2022 /PRNewswire/ – Biohaven Pharmaceutical Holding Company Ltd. (NYSE: BHVN) today announced top-line results from a Phase 3 clinical trial evaluating the efficacy and safety of its investigational therapy, troriluzole, in patients with spinocerebellar ataxia (SCA). The primary endpoint, change from baseline to Week 48 on the modified functional Scale for the Assessment and Rating of Ataxia (f-SARA), did not reach statistical significance in the overall SCA population as there was less than expected disease progression over the course of the study. In the overall study population (N=213), the troriluzole and placebo groups each had mean baseline scores of 4.9 on the f-SARA and the two groups showed minimal change at the 48-week endpoint with f-SARA scores of 5.1 and 5.2, respectively (p=0.76). 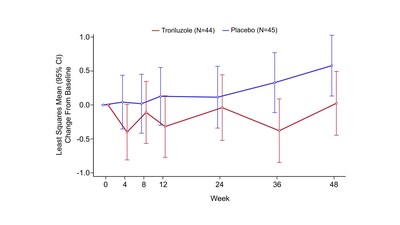 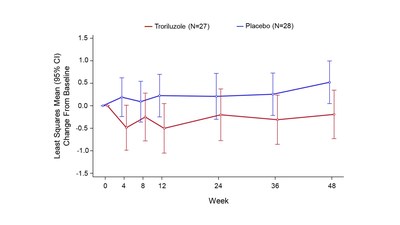 Across all genotypes, patients who were able to ambulate at baseline (i.e., f-SARA Gait Item score = 1) showed a reduction in the relative risk of falls in troriluzole-treated patients versus placebo. Patient reported falls, as measured by adverse events reveal an approximately 58% reduction of fall risk in the troriluzole group (10% versus 23% AE incidence of falls in the troriluzole and placebo groups, respectively; nominal p=0.043). Overall, troriluzole demonstrated a favorable safety and tolerability profile, consistent with past clinical trial experience.

Jeremy Schmahmann, M.D., Professor of Neurology at Harvard Medical School and Founding Director of the Ataxia Center at Massachusetts General Hospital (MGH) commented with regard to the findings, “The importance of morbidity related to falls in this patient population cannot be overstated. The reduction of falls in the troriluzole group, combined with the progression of f-SARA scores in the untreated SCA3 group compared to SCA3 patients on troriluzole, demonstrates that SCA3 patients are experiencing a clinically meaningful improvement in ataxia symptoms on troriluzole treatment.”

Spinocerebellar ataxia is a group of dominantly inherited disorders characterized by progressive ataxia affecting coordination of hands, arms and legs as well as balance and speech. Patients experience significant morbidity, including progression to a wheelchair, impaired gait leading to falls, inability to communicate due to speech impairment, difficulty swallowing, and premature death. While signs and symptoms can appear anytime from childhood to late adulthood, SCA typically presents in early adulthood and progresses over a number of years. The range of symptoms and rate of progression of disease depend on the type of SCA, age of onset, and other genetic factors. Currently, there are no FDA-approved treatments and there is no cure for SCA.

Dr. Susan Perlman, Director of Ataxia Clinic and Neurogenetics Clinical Trials at the David Geffen School of Medicine at UCLA stated, “The f-SARA scale, with a total of 16 points, was specifically designed to detect significant clinically meaningful change in this patient population. The f-SARA change in the SCA3 troriluzole treated group is compelling. Given the excellent safety profile of troriluzole, and the fact that there are no approved treatment options for patients with this devastating neurodegenerative disorder, I am thrilled for my patients that Biohaven is planning to engage with the FDA to potentially move this program forward.”

Vlad Coric, M.D., Chief Executive Officer and Chairman of Biohaven stated, “The fact that the overall study population did not show significant disease progression on the f-SARA at 1 year, as would have been anticipated, and failed to meet the study’s primary outcome measure, highlight some of the challenges of studying rare diseases such as SCA. However, the post hoc analyses by SCA genotype suggest early and sustained improvements in the f-SARA over 48 weeks for SCA3 patients treated with troriluzole compared to placebo. The scale improvements were clinically meaningful, consistent with the role that glutamate excitotoxicity is thought to play in the underlying pathogenesis of this disease and was associated with an important risk reduction in falls in the same SCA3 study population, as well as across all SCA genotypes. Patients with SCA3 have no approved therapies and suffer severe disease-related morbidities, including being at high risk for falling due to incoordination of gait. Given the debilitating nature of this disease, we look forward to sharing the SCA3 genotype data with regulators and working with the FDA to address the high unmet need in this patient population.”

About Troriluzole
Troriluzole is a third-generation prodrug and new chemical entity that modulates glutamate, the most abundant excitatory neurotransmitter in the human body. The primary mode of action of troriluzole is reducing synaptic levels of glutamate. Troriluzole increases glutamate uptake from the synapse, by augmenting the expression and function of excitatory amino acid transporters located on glial cells that play a key role in clearing glutamate from the synapse. Troriluzole has the potential to be developed in a number of other diseases associated with excessive glutamate. Clinical trials are currently underway to evaluate the efficacy of troriluzole in Obsessive Compulsive Disorder (OCD). More information about troriluzole can be found at the Company’s website: https://www.biohavenpharma.com/science-pipeline/glutamate/troriluzole

About Biohaven
Biohaven is a commercial-stage biopharmaceutical company with a portfolio of innovative, best-in-class therapies to improve the lives of patients with debilitating neurological and neuropsychiatric diseases, including rare disorders. Biohaven’s neuroinnovation portfolio includes FDA-approved NURTEC ODT (rimegepant) for the acute and preventive treatment of migraine and a broad pipeline of late-stage product candidates across five distinct mechanistic platforms: CGRP receptor antagonism for the acute and preventive treatment of migraine; glutamate modulation for obsessive-compulsive disorder and spinocerebellar ataxia; MPO inhibition for multiple amyotrophic lateral sclerosis; Kv7 ion channel activators for focal epilepsy and neuronal hyperexcitability, and myostatin inhibition for neuromuscular diseases. More information about Biohaven is available at www.biohavenpharma.com.