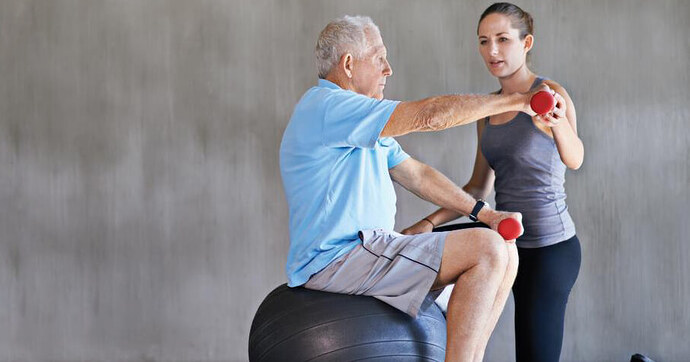 Exercises to Improve Balance Can Reduce Falls and Boost Confidence

Poor balance is a symptom of many neurologic diseases, and people with balance problems are more likely to fall and possibly avoid social engagement. Fortunately, improving balance is possible.

My Neurologist is arranging for me to have Balance Therapy…it’ll be interesting to see if these techniques are used.

Every year the doctor of physical medicine sends me for a month’s stay in a rehabilitation center to stimulate my brain for balance. It’s really good because in these centers we take care of everything, it goes through pure physiotherapy for balance 2x1h/d then occupational therapy which helps with coordination and the use of equipment 1h/d, 'APA for muscle reinforcement and endurance 1h/d, swimming pool 3/4h/d, you have lots of professionals such as the psychotherapist, the speech therapist, the social worker… for each personal need, follow-ups by a doctor specializing in the field, nurses to monitor your hospitalization, in short, these centers are present in many regions.

Wish we had that here.

I wish we did too…it sounds wonderful.
I had a review appointment last week…and was told ‘we’ll contact your GP regarding referral for Balance Therapy’. To be honest I don’t expect to be having this anytime soon…
I wonder…do we expect too much from the NHS…

Should we pay for this sort of therapy ourselves…

Your lucky you’ve had a review appointment, I’ve not seen anyone about my ataxia for years, now appointments are hopefully opening up again I will try to see someone.

I was diagnosed shortly before Newcastle Ataxia Centre was opened…and after all the hype associated with this, I had high hopes of ‘something’ being done about ataxia. Initially I’d had minimal testing linked to my specific symptoms, and these tests were negative.

But…the Ataxia Centre was only operational for 2-3 yrs…apparently there wasn’t sufficient demand to fund Specialist Neurologists. The Neurologists we did have relocated to do research.
While it was open…I donated DNA for a local research project, and a link was made with SYNE1…so I was hopeful of a diagnosis. But my Neurologist dismissed it because it wasn’t 100%.

I was fortunate one of the Neurologists referred me to Queen Square in London, where I had testing for CANVAS (Cerebellar Ataxia with Neuropathy and Vestibular Areflexia Syndrome) but it was was negative. And I had further testing to confirm I had BPPV (Benign Paroxysmal Posterior Vertigo). Positional therapy for this didn’t help.

Since then, I’ve had yearly reviews…until now. My next review is in 18mths.

I’m a member of my local area Ataxia Support Group, and some time ago …people had been told they would no longer be given review appointments. This was the case for those diagnosed with known Ataxias (such as older people with SCA6) where progression was well established and didn’t need monitoring. These people were told to liaise with their GP re any problems, and they could get referral if anything new cropped up.

It is worth keeping in touch for reviews when exact diagnosis is in question…You just never know when new research can give information, even if it relates to therapy of some sort …

I have just returned from review with my consultant who has confirmed that I have Late Onset Ataxia. She is going to arrange Neuro Physio for me. I have previously had Orthopaedic Physio and didn’t realise there were different

I’m waiting for referral to Balance Therapy…I’m not sure which specific Physio is involved…Previously I was seen by NeuroPhysio for problems with dizziness.

Still waiting for appointment for neuro physio. I was told that ataxia doesn’t cause pain. Surely the quite severe back ache I experience after attempting jobs involving stretching and bending must be caused by trying to maintain my balance and must be contributing to the pain? Any thoughts please.

A Special Ataxia Nurse advised Paracetamol…but it didn’t help, and too much can lead to constipation.

Unfortunately, I have to agree with your thoughts. My right side and knee are killing me when I walk. After years of Ataxia, I think that Arthritis is affecting those areas. My gait and balance have changed so much that bones are feeling it.