Looking to the Rainforest

I i’ve had ataxia since I was 42 years old-almost 30 years ago. I’ve had a MRI’s , EEG, EKG, Holter monitor, spinal tap, and every test known to man . I have learned how to live with this disability, but as of late I have fallen far too many times !

My chiropractor thought he could help me until he realized that I have cerebellar ataxia. To the medical community there is no cure. I have searched for relief all the years that I’ve had this disability. I don’t call it a disease because there is nothing diseased in my brain. For some reason, and I believe it is hereditary, my brain cells are dying slowly.

I believe I have finally found a source of real help in the rainforest! I have, in the past week, prepared an infusion of muira puama bark , a herb best known for treating ED. It has been shown to have permanent effects on Locomotor Ataxia…a A disease researched all the way back to the 1880s.
Muira Puama is used in Brazil and in Europe to treat neuro muscular diseases also. It has no side effects.

And with that information, I figured I had nothing to lose by trying it. Well, last night I went dancing! I wasn’t twinkle toes mind you, but nevertheless I could get up and dance a slow dance which I could not do in the last 20 years. My equilibrium is improved after only three days of using this herb. I expected it to take at least two weeks before I could see any results. I drink a half a cup a day mixed with some apple juice, because the taste is not too palatable.
I have ordered the tincture, which is recommended. If you are inclined to order it, be sure it does not contain water and is prepared with 80% proof alcohol. Be sure the herb is from the Amazon rain forest.
I’ll report back next month with an update on my condition.

Fascinating! Thanks for sharing. It’s pretty neat when we can find natural substances that can alleviate some of our symptoms and pain. Jd

Hi😊 I too had manipulation from a chiropracter😏 This was before I’d had an MRI showing twisted blood vessels putting pressure on my Cerebellum. I wish I’d known this before I allowed him to jerk my neck round till it clicked😏

Re Muira Puama. This is thought to be helpful as a general tonic and appetite stimulant, amongst other things. But, it’s primary use is an aphrodisiac, for men (erectile disfunction).

According to Web MD, there are currently no known side effects or interactions🙂xB

I am aware of its use as an aphrodisiac—if it can help this ataxia–I’d much rather be overstimulated than risk getting cancer as is the case with so many pharmaceutical drugs.
I will be taking it as a tincture …the easiest and most effective way of taking it. 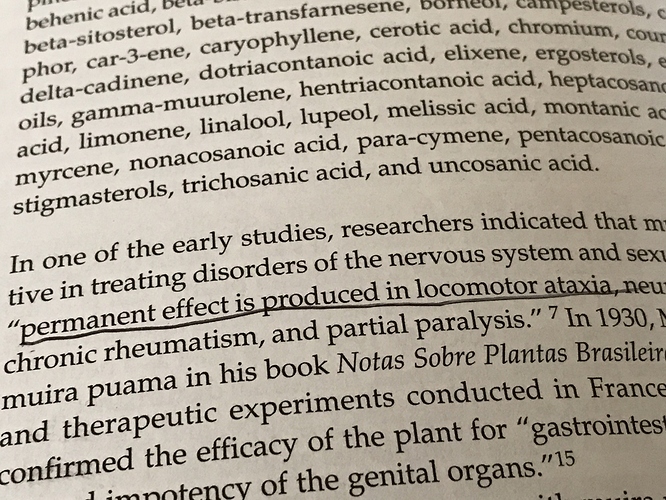 Very interesting. Thanks for sharing. I’ll definitely look into it.

I took CoQ10 for a while, not that I was deficient but just to find out if it made any change to my symptoms. Personally, I didn’t notice anything beneficial😏

CoQ10 is a synthetic form of Ubiquinol, which is created naturally in the body. I read that women past menopause absorbed Ubiquinol better than CoQ10, so I gave it a go.

Whether or not it had something to do with my specific ataxia, or because I’m not deficient, I don’t know… It gave me an exaggerated confidence.

I tackled tasks I’d normally restrict or avoid because exertion floors me😏 The end result was extreme fatigue, pay back time🙄

We’re all entitled to our own views and decisions, isn’t that democracy🙂 But, some people coping with ataxia may be so ‘fragile’ with decision making that they don’t understand how even natural substances can have an adverse effect🤔xB

Each one of us deals with our deficiencies in our own way. After all these years, I’m certain that I would be in a wheelchair…or worse…had I not fought this thing the way I do…
I am keenly aware of my limitations and even if I’m in the middle of vacuuming I will stop and rest for 45 minutes.
I started taking Ubiquinol a couple of weeks ago…and like all supplements, I don’t expect results of any kind for at least 3 weeks.

I have little faith in the medical community…people think doctors have this unique ability to cure disease…they don’t. The healing herbs and essential oils that God gave us are only good if the pharmaceutical industry can make a synthetic form, prescription needed…they all make money…
If there’s a cure for my ataxia, it won’t come from the medical community…
Btw…my husband was treated for cancer conventionally…he was cut up, poisoned with chemo, burnt with radiation…and then he died…the cure is out there…Graviola…search it on web md…or any of the conventional medicine sites…all kinds of warnings…Mayo Clinic even warns in big letters…DO NOT TAKE…
Then go to Amazon.com and read the reviews of cancer cures…from real people.
To make my point…Humira causes Lymphoma…they advertise that drug like it’s a miracle cure…but it’ll give you cancer…and that’s acceptable.
Please forgive my cynicism…I tend to get carried away with my feelings…in a nutshell, I only trust God.

I hope your condition improves…

Ataxia, like cancer, can take many forms/types. It’s well documented that even within the same family no two people are likely to have exactly the same progression.

None of us are obliged to follow medical advice but it’s good to weigh up all the options before deciding​:slightly_smiling_face: In an ideal world this wouldn’t be necessary but till then…

I pray you will research Graviola for cancer…I drink A couple of the tea once or twice a week-it’s also good for many other ailments.
http://www.raintreenutrition.com/graviola.htm#.Vkpb_3o8KrX

Thankyou for the link. After previously having a reaction to Evening Primrose Oil ( it appeared to intensify an unwanted symptom), I’m always interested in any notes re interaction with current medication or adverse effect on certain conditions, so I scrolled down to ‘Caution’.

The link cautions against combining Graviola with ATP-enhancers like CoQ10. It’s only a few weeks since I stopped taking Ubiquinol myself, so I could try Graviola​:thinking:xB

Mommaroo, I’m with you! And yes, I know it rhymes! I’ve come across a product that is immune supporting. I’m healing faster now. It is natural product. No side effects. No pharmaceutical interactions to steer clear of. You can find the background story on www.drrondrucker.com …the product totally supports the immune system. JD

Sounds good…Do you know what the ingredients are? I don’t like to take supplements without knowing what’s in them.

I am a little more than a month into taking ubiquinol and 100% wild harvested muira puama bark in tincture form.
Though I am in no way near cured of this ataxia, I am thrilled that my nystagmus seems to be clearing up and my gait improved.
I went dancing again on Saturday night, and felt so much more steady on my feet!
Do I think this rainforest herb is working? Absolutely!
Still,when I am tired, I do tend to stumble, but I’ve no doubt that my condition is improving.
I will continue to take the drops along with the rest of my vitamins and supplement

Fantastic Mommaroo! Enjoy dancing! And thankyou for reminding us all that there can be hope!

It’s been quite a while since my last post. I stopped taking Ubiquinol…don’t know why…I just never purchased more when my supply ran out.
I have added Raintree Pharmacy’s Brain Support because it contains so many of the herbs which support the neuro muscular system. I notice an improvement in my gait.
Most important, I have been paying close attention to how foods affect me. Processed foods are deadly for me. I try to avoid them as much as possible. I was visiting my son during Christmas.he uses Shedd’s Spread instead of butter, so I used it to butter my toast. Within an of eating, I was staggering all over the place! I had to just stay put for a few hours, drinking plenty of water. Luckily I had brought some herbal detox tea with me which I also drank…and that helped a lot.
I see a chiropractor regularly. He doesn’t touch my neck, is very knowledgeable about how the cerebellum communicates with the spinal chord. He gave me a couple of pointers about different movements to do Before I begin to move about. One I do in bed in the morning: I raise my left leg and right arm simultaneously , then switch to the opposite leg and arm. I do this about ten times…it works.i rise pretty steady on my feet.
I am far from being cured of this disease, and I will continue to keep this body moving!
It would be nice if we could find that one common denominator that exasperates our conditions…it would certainly be a start in controlling this disease!