I’m recently back from holiday, during which time I was able to attend the NAF Convention in San Antonio😊

Everybody was most welcoming😊 I was able to meet up with Alan Thomas, and Ben Munoz made a special trip to speak to us😊

I arrived at the Hotel the day before the Convention started, so was able to visit the Alamo. Having seen the film, the location came as a bit of a shock, in a busy thoroughfare near the Hotel😳 Despite that, it was a moving experience.

The Hotel was vast, with easily accessible Conference facilities😊 I tried both weighted vests, Motion Theraputics and OT Vest. They work on different principles, both are proven to give positive results but as always with ataxia, it’s a case of trial and error for the individual.

I’ve been to a few AtaxiaUK Annual Conferences, and for this reason was interested in experiencing the NAF Convention😊 My main impression was that it was for obvious reasons on a much larger scale😉 It was good to see Exhibitors, I hadn’t seen any in the UK. Another thing I’d never experienced, a Silent Auction, a good way of raising funds and, a chance to bid for Weighted Vests😉

There were some interesting speakers, I was particularly drawn to Brent Vogel, he has that special ability to interact well and hold attention​:blush: The Birds of a Feather group I attended was very sociable, questions, exchange of suggestions and advice flowed easily​:blush: The day rounded off with a Banquet​:yum: and disco

On the Sunday, I joined a group of friends, and we visited Morgan’s Wonderland. This a specially designed play park for children who find mainstream play parks challenging😊

I was lucky to be able to incorporate the Convention with a holiday, and met lots of very nice people😊xB

What an interesting time you had, Beryl. Had you met Alan before (I know he’s in the UK too)?

How many people attended, and how many were there from outside of the UK?

I met Alan for the first time at an AtaxiaUK Conference😊 This Conference was not long after I’d been diagnosed and I was very apprehensive, at that time I hadn’t anyone else with ataxia, and felt very much on my own in dealing with the challenging symptoms. I thought I would ‘stick out like a sore thumb’ but I felt very much at home😊

There were approx 300 attendees at the NAF Convention😊
I recall one small boy who tore around in a special wheelchair, it looked very much like a baby walker and someone told me it had no brakes. The boy’s mother got plenty of exercise😉

Alan had a small group of people with him from Wales😊 But, other than that I wasn’t aware of any other UK visitors.
I travelled with my husband, we hadn’t had a holiday since 2010, so we’d first gone to Orlando and then travelled on to San Antonio😊xB

I’d been meaning to ask you about the NAF conference, Beryl, so I was happy to see you had written about it! Sounds like you had a lovely time, as well as met a few people ! Speaking of the silent auction and weighted vests, I won one (BalanceWear) at the Detroit, Michigan NAF conference a few years ago. Ended up paying 1/2 the price that it usually costs…,yay…,ha! It’s been very helpful! Anyway glad you got to attend and make a vacation (holiday) out of it!!! Hope all is well with you and yours besides! XORose ;o)

Such a good view of the NAF amazing conference.

it was great to catch up with Beryl and Husband, Brian.
We all met up with Ben Munoz - Bens friends -

As already said the NAF conference is Larger,
I have ALWAYS said it seems more friendly, the people are more open, so the information is more collaborative and inclusive and easily shared…

I look forward to attending every year, and also, I too, make a holiday out of this ataxia adventure. 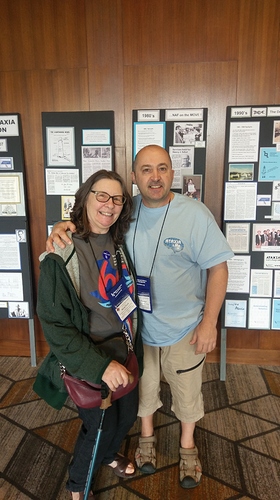 I’d had 2 weeks in Florida prior to this, and you’ve got a better tan😉xB

This morning I watched a programme about HenryVIII on the History Channel. In those days, it was the fashion for ladies to have pale skin. Elizabeth 1st is a prime example. I would have fitted in​:wink:xB

Yes, it’s interesting how fashion goes in cycles! I’ve never been one to chase a tan, but two weeks ago I had to have some skin cancer removed from my nose. (No, it did not hurt at all, even after, which I don’t understand.) So now I’ve become a connoisseur of sunblock.

There are such good things on History channel, aren’t there? And did you know, a lot of those – and more – are available on YouTube? I watched a series about Queen Victoria on youtube. Fascinating woman! (Not to mention her fascinating heirs.)